Inquisitor Gallowglass is a young and struggling Inquisitor leaning towards the holy Ordos Xenos and Hereticus. Shortly after becoming Interrogator, Gallowglass is said to have suffered cruel tortures and rituals in the hands of heretics. Since this time he is known to wear a black glass mask crafted by the Brotherhood of Mars. Quite unique is also his gigantic physis; nearly being as huge as one of the Space Marines and often seen in his Powerarmor, Gallowglass strikes fear into the hearts of common folk and lesser peers.

Gallowglass is a very patient person, coldly calculating and soft spoken. Not much is known about his past but that he grew up in a warrior clan on the very planet, he named himself after. Since becoming Inquisitor he has built up a huge network of spies and counterspies like a grand chess game. The death of a human being seems to move him little, but a proven few of his closest acolytes have earned a close place to his heart.

Although every lead of corruption is being followed by the young Inquisitor, his foremost target are cultists, heretics and Chaos in all its ruinous forms. Gallowglass has been known more than once to cross borders into the fields of competences of the other Ordos. Whereas Inquisitors from Ordo Malleus seem to have no problem with this attitude, Inquisitors of Ordo Xenos do not take these transgressions lightly. In his peer Gallowglass is seen as an ambitious and enduring upstart.

--> Chapel of the Ancients - Mission Archive of Inquisitor Gallowglass

Season One The Gallowglass Conspiracy 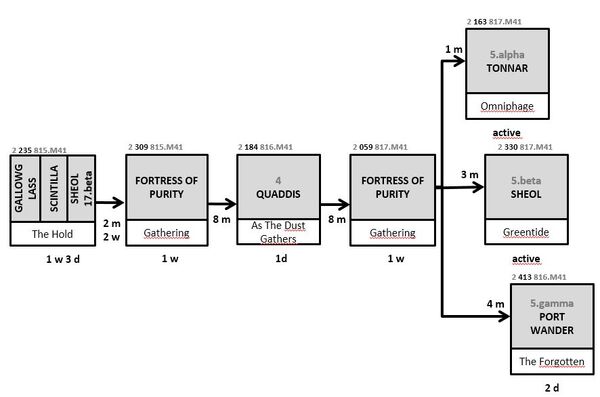 The Holy Retinue of Inquisitor Gallowglass[]

Leaders of the Retinue[]

Heroes of the Inquisition[]

This are the House Rules for 40K Starship Battles (based on W40k Roguetrader, Battlefleet Gothic and Star Wars: X-Wing).