Edit
watch 01:36
We're Getting Mutants in the MCU - The Loop
Do you like this video?
Play Sound

Gallowglass / Heroes of the Inquisition 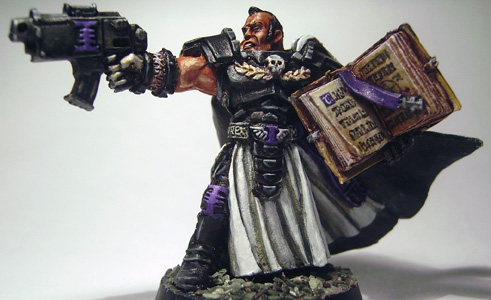 Why do the nations of the stars conspire and the peoples plot in vain? The kings take their stand and the Great Ones gather together against the divine Emperor and against his Chosen. "Let us break their chains," they say, "and throw off their fetters." The One enthroned on holy Terra laughs; the Godemperor scoffs at them. Then he rebukes them in his anger and terrifies them in his wrath, saying: "I have installed my kings from Terra, the holy rock."

We will proclaim the decree of the Godemperor: He said to us, "You are my Sons; today I have become your Father. Ask of me, and I will make the nations your inheritance, the ends of the Galaxy your possession. You will rule them with an iron scepter; you will crush them to pieces like pottery." Therefore, you kings, be wise; be warned, you rulers of worlds. Serve the divine Emperor with fear and kiss his feet with trembling. Lest he be angry and you be destroyed in your way, for his wrath can flare up in a moment. Blessed are all who take refuge in him.

Diary of the revered father Kilian Athanasius Kerensky & Facts about him[]