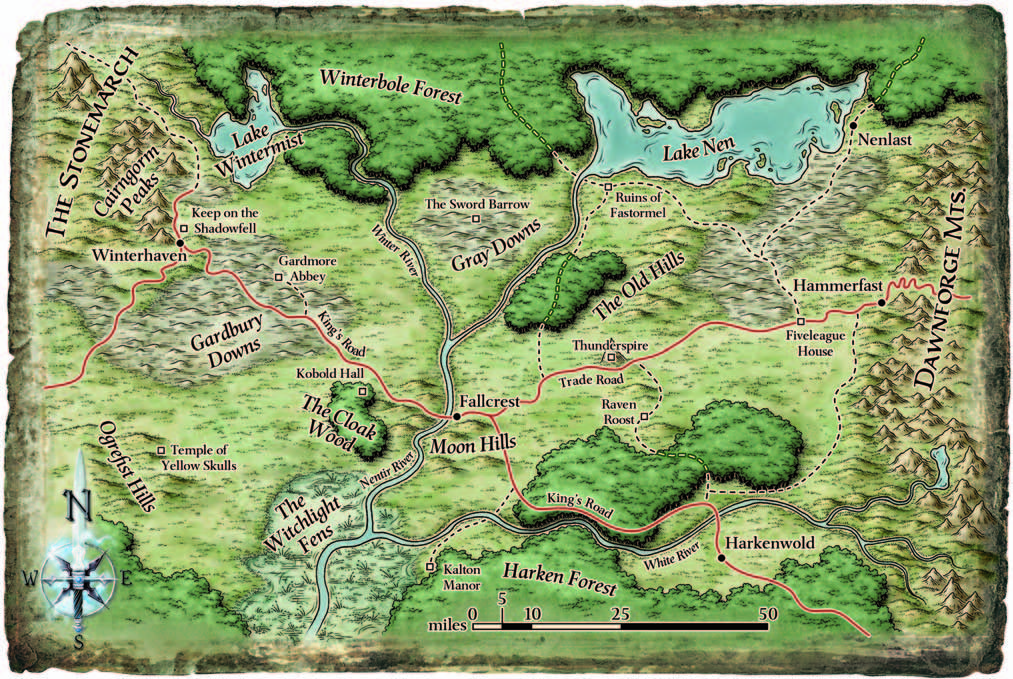 Fallcrest lies near the middle of the broad borderland region known as the Nentir Vale. The vale is now mostly empty, with a handful of living villages and towns scattered over this wide area. Abandoned farmsteads, ruined manors, and broken keeps litter the countryside. Bandits, wild animals, and monsters roam freely throughout the vale, threatening anyone who fares more than few miles away from one of the surviving settlements. Travel along the roads or river is usually safe—usually. But every now and then, travelers come to bad ends between towns.

The Nentir Vale is a northern land, but it sees relatively little snow—winters are windy and bitterly cold. The Nentir River is too big to freeze except for a few weeks in the coldest part of the year. Summers are cool and mild.

The “clear” parts of the map are covered in mixed terrain—large stretches of open meadowland, copses of light forest, gently rolling hills, and the occasional thicket of dense woodland and heavy undergrowth. The downs marked on the map are hilly grassland, with little tree cover. The hills are steeper and more rugged, and include light forest in the valleys and saddles between the hilltops.

The Gardbury Downs take their name from this striking ruin, a large monastery that has lain in ruins for almost one hundred fifty years. The abbey was dedicated to Bahamut and served as the base of a militant order of paladins who won great fame fighting in Nerath’s distant crusades. As the story goes, the paladins brought a dark artifact back from a far crusade for safekeeping, and evil forces gathered to assault the abbey and take it back. Extensive dungeons lie beneath the ruins, which might still conceal the hoarded wealth of the old crusading paladins.

This large burial mound stands near the middle of the Gray Downs, a desolate region. The old human hill-clans who lived in the Vale raised the barrow centuries before civilized folk settled in Fallcrest. The hill-folk are long gone, but their grim barrows remain. The Sword Barrow gained its name because scores of rusted blades of ancient design are buried around its edges, blades pointing inward; a visitor can turn up several in a few minutes of looking around. The blades seem completely ordinary, not hinting at the old warding magic that surrounds the place.

A dwarven hold cut from the rock of a deep vale in the Dawnforge Mountains, Hammerfast is the largest and wealthiest town in the region. The Trade Road runs through the citadel gates and continues eastward beyond the Dawnforge Mountains. Hammerfast is governed by a council of masters, each the leaders of one of the town’s powerful guilds. The current High Master is the leader of the merchant guild, a dwarf named Marsinda Goldspinner. The dwarves of Hammerfast look to their own first and don’t give away anything for free, but they are honest and industrious.

This large woodland stretches from the Nentir River to the mountains and extends for miles to the south. It separates the Nentir Vale from the more populous coastal towns of the south. A strong goblin keep called Daggerburg lies somewhere in the southwest reaches, not too far from Kalton Manor; the goblins sometimes raid the river-traffic moving along the Nentir, or send small parties of marauders to Harkenwold’s borders.

An elf tribe known as the Woodsinger Clan roams the eastern portions of the forest. They occasionally trade with the humans of Harkenwold and keep an eye on travelers along the old King’s Road. They have a long-standing feud with the Daggerburg goblins, and the goblins keep to the western parts of the forest to avoid swift and deadly elven arrows. However, the goblins are growing more numerous and have become bolder in recent months.

Half a dozen small villages lie along the upper vales of the White River. Together, they make up the Barony of Harkenwold—a tiny realm whose total population is not much greater than Fallcrest’s. The people of Harkenwold are farmers, woodcutters, and woodworkers; little trade comes up or down the old King’s Road.

The ruler of Harkenwold is Baron Stockmer, an elderly man who was known for his strong sword arm in his youth. He is a just and compassionate ruler.

Back in the days when Nerath was settling the Nentir Vale, minor lords in search of land to call their own established manors and holds throughout the area. Kalton Manor was one of these, a small keep raised by Lord Arrol Kalton about two hundred years ago. Lord Arrol intended to settle the lower vale of the White River, but it was not to be—monsters from the Witchlight Fens drove off the tenants Arrol had brought with him. At the end, Arrol and a handful of his servants and family lived alone in a half-finished keep slowly falling into ruin until they disappeared as well. Stories tell of hidden treasure—the old Kalton fortune—hidden in secret chambers beneath the ruined keep.

Keep on the Shadowfell[]

Long ago, soldiers from Nerath built a strong fortress over the Shadowfell rift to protect it. The old keep lies in ruins now, and a new generation of cultists has secretly taken up residence here. They seek to undo the magical wards sealing the Shadowfell rift and open the way for undead horrors.

Like Kalton Manor, the wreck now known locally as Kobold Hall was the estate of a minor lord who came to Nentir Vale to establish his own demesnes. Ruined during the Bloodspear War, the old castle has been abandoned for almost a century. Kobold tribes from the Cloak Wood now lurk in its depths.

This tiny human village lies at the east end of Lake Nen. The folk here make a meager living by trading smoked fish to the dwarves of Hammerfast. They also deal with the Tigerclaw barbarians of the Winterbole Forest. When the wild folk choose to trade, they come to Nenlast to barter their pelts and amber for good dwarven metalwork.

This small keep stands at the southern end of the Old Hills. Once it was the seat of a small manor, but it fell into ruin long ago.

Once a prosperous town on the shores of Lake Nen, Fastormel was destroyed by the Bloodspear orcs and has never been resettled. The town was ruled by a Lord Mage (the most powerful wizard in town claimed the ruler’s scepter), and the Mistborn Tower of the last Lord Mage still stands amid the ruins of the town. The tower is shrouded in a strange silver mist that never dissipates, no matter what the weather would otherwise dictate.

A rugged land of stony hills and deep gorges cut by white-rushing rivers, the Stonemarch is home to tribes of dangerous humanoids and giants. Orcs, ogres, giants, and trolls haunt the farther reaches of these barren lands. Fortunately for the residents of the vale, the monsters rarely come east over the Cairngorm Peaks. A great orc-warren known as the Fanged Jaws of Kulkoszar lies in the northern part of the wasteland; here the chief of the Bloodspear tribe rules over hundreds of the fierce warriors.

The ruins of an evil shrine stand in the middle of these desolate hills. Legend tells that a rakshasa prince summoned demons to this place and bound them to his service by imprisoning their vital essences in gold-plated human skulls. None of these have yet been recovered from the ruins, but the story persists. Deep caverns beneath the ruins lead all the way down to the Underdark, and from time to time dangerous monsters of the deep places emerge here and prowl the nearby lands.

This striking peak is the largest of the Old Hills. Beneath Thunderspire lies the ancient minotaur city of Saruun Khel. The minotaur kingdom fell almost a hundred years before Fallcrest was established, when a struggle for succession led to a vicious civil war.

Hard under the Cairngorms at the west end of the Nentir Vale lies the remote town of Winterhaven. Like Fallcrest, Winterhaven is a small town surrounded by a few miles of farmland and pastures.