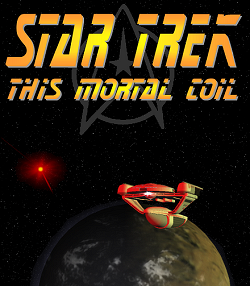 Star Trek: This Mortal Coil is an RPG campaign created by Gonk in May 2007 using the GURPS system (formerly using the Decipher "CODA" system). It follows the voyages of the science vessel U.S.S. Tesla and is set in the "Lost Era," beginning in the year 2304.

This Mortal Coil attempts to adhere to the Star Trek canon wherever possible. On pages about the campaign, canonical events and facts will be sourced as such with parentheses.