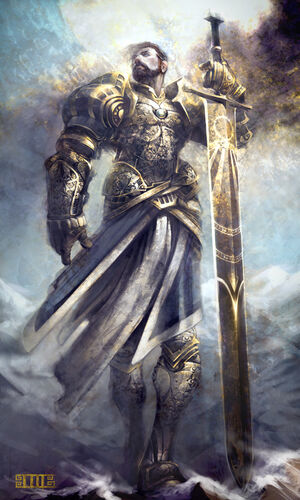 Xion’s father was a prince of an elven nation on Myra and the eldest son of the King. He fell in love with a human woman and had wanted to wed her. Unfortunately, he has two brothers in line to the throne and he knew the elders would oppose this union. The youngest brother was a lazy prince who although unambitious, didn’t care for the people and was happy living the luxurious life. The second brother was a power-hungry elf who had felt that the king was always favouring the eldest son, and thus would stop at nothing to get what he wants (however cruel and ruthless he must be). Torn between his people and the love of his life, Xion’s father had to make the hardest choice. To wed his love, and let his people suffer, or to abandon her for the greater good. Xion’s father chose the latter. But before that, Xion’s father met up with his love in one final night of passion before they bid farewell. Little did he know, Xion was conceived that night and his mother then went into hiding.

When Xion was young, his mother would always tell him about stories of his father and his feats and deeds for the people, but never revealing his identity. It was only after his mother’s death that he found a letter she wrote to him on her deathbed that he learned the truth of his father. It was then that Xion vowed that he would follow his father’s footsteps, always putting the people before anything else.

Retrieved from "https://rpg.fandom.com/wiki/Xion?oldid=58201"
Community content is available under CC-BY-SA unless otherwise noted.